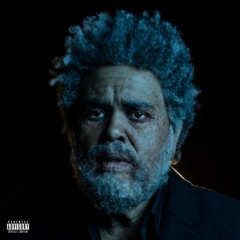 “You are now listening to 103.5 Dawn FM. You’ve been in the dark for way too long. It’s time to walk into the light and accept your fate with open arms. Scared? Don’t worry. We’ll be there to hold your hand and guide you through this painless transition. But what’s the rush? Just relax and enjoy another hour of commercial ‘free yourself’ music on 103.5 Dawn FM. Tune in.”

The Weeknd's previous album After Hours was released right as the world was falling into the throes of the pandemic; after scrapping material that he felt was wallowing in the depression he was feeling at the time, Dawn FM arrives as a by-product of—and answer to—that turmoil. Here, he replaces woeful introspection with a bit of upbeat fantasy—the result of creatively searching for a way out of the claustrophobic reality of the previous two years. With the experience of hosting and curating music for his very own MEMENTO MORI radio show on Apple Music as his guiding light, Dawn FM is crafted in a similar fashion, complete with a DJ to set the tone for the segments within. “It’s time to walk into the light and accept your fate with open arms,” the host, voiced by Jim Carrey, declares on the opening track. “Scared? Don't worry.”

Indeed, there is nothing to fear. The Weeknd packs the first half with euphoric bursts that include the Swedish House Mafia-assisted “How Do I Make You Love Me?” and “Sacrifice”. On the back half, he moves into the more serene waters of “Is There Someone Else?” and “Starry Eyes”. Despite the somewhat morose album cover, which reflects what many feel like as they wade through the seemingly endless purgatory of a life dictated by a virus, he’s aiming for something akin to hope in all of this gloom.

How Do I Make You Love Me?

A Tale By Quincy

Is There Someone Else?

Every Angel is Terrifying

The Weeknd
R&B/Soul
2:59
2022-01-07
© 2022 Chartoo. Available on Apple Music. Last Updated on 18/01/2022, 05:35:30. Apple, the Apple logo, Apple Music, iPad, iPhone, iPod, iPod touch, iTunes, iTunes Store, iTunes U, Mac, and OS X are trademarks of Apple Inc., registered in the U.S. and other countries. Apple Books, App Store, and Mac App Store are service marks of Apple Inc. IOS is a trademark or registered trademark of Cisco in the U.S. and other countries and is used under license. QR Code is a registered trademark of Denso Wave Incorporated. All other trademarks, logos, and copyrights are property of their respective owners.
DesktopTabletMobile
Improve this translation
Preview provided courtesy of Apple
Preview provided courtesy of Apple