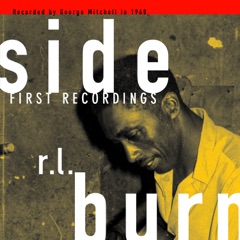 A master in his prime

George Mitchell’s jaw was on the floor when he first recorded R.L. Burnside in Coldwater, Mississippi, on a sweltering night in August of 1967. Mitchell had already recorded several established musicians in the area (Will Shade, Furry Lewis, Fred McDowell) when a friend of Burnside’s — the harmonica player Johnny Woods — told Mitchell about Burnside. First Recordings reveals a musician playing and singing in a hypnotic, cyclical style that contained elements of McDowell and John Lee Hooker, but was unlike anything anyone had ever heard outside the micro-locale of North Mississippi. The complex repetitive motions he unleashes on self-possessed numbers like “Jumper On the Line,” “Long Haired Doney,” and “Goin’ Down South” give Burnside a power and a presence befitting a full band, and he never — ever — misses a beat. Mitchell’s 1967 session would mark the beginning of a long and fruitful career. First Recordings not only captures a master in his prime, but preserves that moment of jaw-dropping discovery when the immense power of an unknown musician first touched foreign ears.

Jumper on the Line

Sat Down on My Bed and Cried

R.L. Burnside
Blues, Delta Blues, Country Blues, Electric Blues, Acoustic Blues
3:15
2003-06-10
© 2020 Chartoo. Available on Apple Music. Last Updated on 05/02/2021, 17:34:36. Apple, the Apple logo, Apple Music, iPad, iPhone, iPod, iPod touch, iTunes, iTunes Store, iTunes U, Mac, and OS X are trademarks of Apple Inc., registered in the U.S. and other countries. Apple Books, App Store, and Mac App Store are service marks of Apple Inc. IOS is a trademark or registered trademark of Cisco in the U.S. and other countries and is used under license. QR Code is a registered trademark of Denso Wave Incorporated. All other trademarks, logos, and copyrights are property of their respective owners.
DesktopTabletMobile
Improve this translation
Preview provided courtesy of iTunes
Preview provided courtesy of iTunes